Auroras are difficult to predict with precision. They have stops and starts (known as sub-storms). If you are out there, you need to be patient and lucky. Here are some tools that will increase your chances.

Here is the prediction of storm intensity for the next few minutes (the higher the Kp number, the larger the Aurora):

(Refresh this page to update the above, it is updated on the server every 2 minutes)


Why miss your Aurora?
Get Aurora Alerts customized for your location.

Now, find the Kp number line on one of the following maps that matches the Kp number predicted above. If you are located at or above the estimated Kp line, you are in the right spot. You might even be in luck if you are located within next lower line, but you will have to look lower on the horizon. Be aware though, ground based light pollution and weather will have a greater impact at these more marginal locations.

It's helpful to get confirmation of activity with NOAA's Ovation map. The Kp number gives nice info on how large the storm is, but the Ovation map does a better job of telling you if you can actually see it. But keep in mind that Ovation is an average, so it changes more slowly than the more dynamic Kp forecast above. It gives a 20 to 40 minute forecast of the predicted size of the aurora along with a color-coded probability of seeing the aurora over various spots on the Earth. Here is the most up-to-date image:

It's a good sign if you see a thick aurora band with some areas of light yellow, orange or, better yet, RED on this map as opposed to just a thin (or transparent) band with only dark green.

The size of a visible Aurora will be bigger than what is shown on this map, because the map gives the overhead location of the Aurora. The area of a visible aurora is greater because it can be seen at spots other than 90 degrees directly up (straight above your head). The Aurora might be visible at 45 degrees, 30 degrees or even lower on the horizon depending on its brightness.

Each number in the diagram below represents a rolling 5 minute average of the Bz taken along the length of the solar wind stream. This data comes from a satellite about 1 million miles from earth. These 5 minute stream segments are all headed towards earth. They should arrive in 20 to 40 minutes. They are given in the order they'll hit earth, with the first 5 minute average hitting first. Think of each number representing a 5 minute long cloud of solar wind speeding towards earth. Remember, it's best for Bz to be negative, and the more negative, the better.

(Refresh this page to update the above, it is updated on the server every 2 minutes)

Check out the Three Day Forecast.

Dark. Dark. Dark. It is not just about low light. It is important to remember the widest part of the Aurora is when the sun is on the opposite side of the earth. So late, nighttime (or early morning) dark tends to be best. But you also want few competing light sources so get away from the city lights and let your eyes adjust to the darkness. The further away from those earth based light sources the better for seeing the Northern Lights. Full moons hurt a bit because they increase ambient light and darkness is best for viewing. The darker the moon, the better. Here's how the moon looks right now: 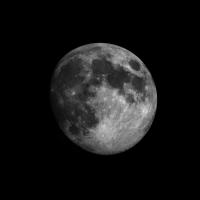 Auroras happen in the upper atmosphere, so if there is cloud cover, you are out of luck. Cold and clear are best for viewing the Aurora:

While they have seen Auroral sub-storms as far down as Cuba, realistically north is where you need to be. The stronger the Aurora the more south one can see it. Check the Kp maps (above) and the size of the aurora oval (also above). Also, if you're not sure which way is north, don't forget to bring a compass.


THE PROBLEM WITH SEEING THE AURORA:

Let's say two months from now the Aurora is flaring up in your area -- the sky is ablaze with greens, violets and reds -- but instead of watching it, you're home sitting on the couch.

Why? Because you simply didn't know about it.

That's one of the problems with seeing the Aurora. It doesn’t run on a schedule. Often Auroras happen with only 30 minutes warning.

That's why it's important to have a partner watching out for it for you. Someone who will watch the Aurora data, then, notify you immediately when the conditions are right for your area.

If you're serious about experiencing the Aurora, get Aurora Alerts customized for your location.

Why miss your Aurora? Get Aurora Alerts.

Don't miss your Aurora.
Get Aurora Alerts customized for your location.